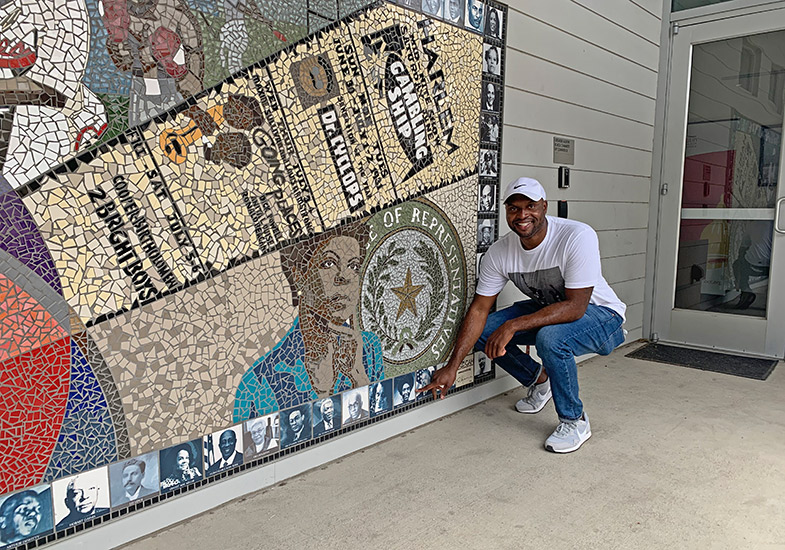 Javier Wallace of Black Austin Tours at “Reflections,” a mural at the African America Cultural Facility; (c) Soul Of America

Austin – A Tale of Two Cities

For an activity-packed trip to a foodie and music haven, head to Austin. The capital of Texas earns its reputation of being fun and hip with new restaurants, food trucks, night spots, and festivals. And African American culture and history run deep. Yet, the two experiences seem world’s apart, with the historically Black district located in the East section of the city. To the rest of the world, the touristy side of this fast-growing city often overshadows the richness of the city’s African American heritage.

For example, Austin is known as the “Live Music Capital of the World” with 250 performance venues and such renowned festivals as South by Southwest and the Austin City Limits. They include R&B, blues, jazz, Hip-Hop, and similar genres. But celebrations featuring black and brown people get less attention, such as Carnaval Brasileiro, Austin Reggae Festival, and Musical Explorations, summer series featuring African American artists.

And although Austin is a foodie town in general, visitors are looking for the best restaurants that serve one specific cuisine – barbecue. Black-owned restaurants don’t disappoint in a city that ranks in the top 10 nationally for barbecue. And the soul food is on point, too.

Let Black Austin Tours be your guide. As this capital and university city continues to grow and prosper, community activists like Javier Wallace of Black Austin Tours are working to ensure that African Americans get a piece of the pie. One way to support the community is to visit, see, eat, drink and appreciate the places where black people put down roots a century ago and still are cultivating a vibrant culture today.