For Brothers Visiting Rio, the dream of Rio de Janeiro may be of exotic, beautiful women who grope them at the beach. Given some degree of truth in that statement, it should come as no surprise that many American and European males, including those wanting to be temporarily single, have developed a skewed view of Brazil. It has persisted for decades.

The beauty of Brazilian women, due to their mix of African, Native American and European features, is world renown. Brazil had a very small middleclass and oversized poverty. With conditions ripe for exploitation, the sex trade only awaited a spark of publicity. That spark was provided by American and Euopean sailors who first discovered Rio during and shortly after World War II. Word of mouth has been spreading ever since.

Though Brazil’s middleclass is growing, it trails America, Europe, Japan and South Korea. Poverty is twice as high as America. Evidence of Brazil’s income disparity is the Dollar goes 3 times as far. As long as no violence occurs, government authorities seem to look the other way because so many American and European men spend money, then leave. In government terms, money with no constituent is the best money. And so the sex trade thrives in the shadows.

By the way, with so many handsome and sexy men, everybody gets their swerve on — straight or gay. My purpose for visiting had nothing to do with a search for the loose booty of exotic women. My goal was to reveal the larger beauty of Rio de Janeiro — one that men and women as singles, couples and groups, can both appreciate. But knowing about the sexy reputation of some Rio tourist areas and recognizing that I am a happily married man, was I visiting Temptation Island? 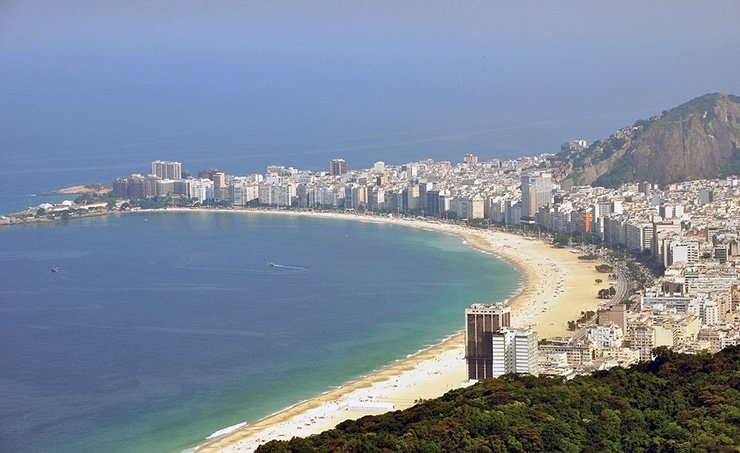 Termas are their brothels, which appear to operate legitimately within the reaches of Downtown and Copacabana Beach. But one need not visit a Terma directly. One particular outdoor café and a disco venue (Help) on Avenida Atlantica in Copacabana Beach was populated with “working women” and foreign men. Though Help closed a few years back, the termas continue. Be forewarned that pickpockets work the same venues of distracted, inebriated men.

Sadly, termas, beaches and Christ the Redeemer statue are often their full extent of the sights and cultural interactions many men use to judge Rio de Janeiro and by extension, Brazil. Such a waste.

For brothers with a conscious, there are two things to keep in mind. First, working women began as teenagers who chose this lifestyle out of necessity. Many have no other viable economic avenues. Some even feel like they are selling their souls to support their children and in many cases, entire families. Be thankful that your wife, daughter or niece does not have to make that choice. Tip every waitress, concierge, housekeeper, tour guide, and taxi driver well. Talk to them about the benefits of school and international travel. Let them know that we Americans support their higher aspirations and that general tourism is a viable life alternative.

Second, HIV and VD have victimized many a tourist. So don’t do anything stupid with your fantasy. There’s nothing worse to ruin a great vacation. PROTECTION is the order of the day and never carry all of your money and credit cards with your if you plan to explore your fantasy. Lock most in the hotel safe.

There are plenty of single women who would like to begin real relationships with single American brothers — a far better choice than the working women route! Ask an experienced hotel concierge for ideas.

Rio de Janeiro is one of life’s must-visit destinations. The music feels like an extension of home. Carioca are some of the friendliest people on Earth. It’s easy to connect with them on so many levels because they make black folk feel welcome. Unforgettable granite formations protrude from several of the world’s most beautiful beaches. The sublime charm of watching sunrise from a hotel room in Ipenema, Copacabana, Leme or Leblon beaches and watching people of color playing volleyball and surf will stay with you for a lifetime. Daily fishing tours can be relaxing or challenging as a sport, whichever you prefer.

The magnificent cuisine, a derivative of so many cultures and Rio’s maritime setting, can be had for only $12-$15 at fine churrascarias. Buy jewelry and leather goods for a third of American prices. Visit a rainforest the same day you take Samba lessons from a master. In fact, take your lady to a Samba class and I guarantee it’ll add romance to your love life.

Rio nightlife includes colorful and acrobatic Vegas-like shows for less than Vegas prices. As the one-time capital of Brazil, Rio maintains excellent art & history museums. Speaking of culture, Carnival and New Year’s Eve Celebrations are the stuff of legends. For a slice of what regular folk enjoy, ride MetroRio to a soccer match at the Maracana Stadium. It’s like combining the crowd of a pro football game with the excitement of a Hip-Hop convention.

Lastly, in case you are wondering, I left Temptation Island with my marriage vows in tact. But I can’t wait to return — with my wife.