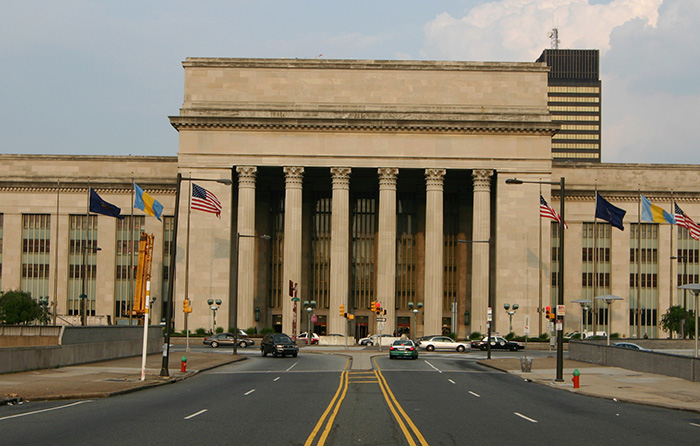 People with less than Acela Express budgets take the regional train which runs a half-hour longer.

Though delayed by the pandemic, Nextgen Acela trains to feature speeds up to 160 mph begin service in 2024. They will run more frequently, produce shorter trip times, and include more amenities for an exceptional passenger experience. See Amtrak Acela journey towards world-class service.

Phlash Bus
DESCRIPTION: Zip between hotels, shops and restaurants, historic sites and museums via a convenient downtown shuttle to many popular visitor destinations: Art Museum, The Gallery, Old City, South Street, Penn’s Landing, Chinatown, Independence National Park and Philadelphia Zoo; Ride all day for $4
ADDRESS: Route travels from the waterfront west on Market Street, then around City Hall and up Ben Franklin Parkway to Philadelphia Museum of Art and then on to the Please Touch Museum
WEBSITE: https://www.phillyphlash.com

Cruise Philly
DESCRIPTION: The Cruise Terminal is located on Pier 1at the end of Broad Street in the Naval Business Center; Norwegian Majesty cruises to Bermuda, Canada and New England from here; the terminal building is 44,000 square feet with 30 check-in booths for cruise days and a lounge that seats up to 300 passengers; Taxis are popular whenever a ship is comes to port.
ADDRESS: 5100 South Broad Street, Building #3
PARKING: $15 per car
PHONE: 856-968-2052
WEBSITE: https://cruisephilly.org

Philadelphia Freeway Network has newer segments that are well designed, but Schuykill Expressway has too many sharp curves. Signage on the freeways often leave much to be desired. As a result, many drivers unnecessarily take slower boulevards to cover long distances or have difficulty finding entry ramps to freeways. But narrow streets cause many back-ups entering Center City. HOV lanes have been added to more freeways and bridge tolls across the Delaware River are reasonable for the distance covered. Note that I-295 New Jersey Turnpike is a Tollway.