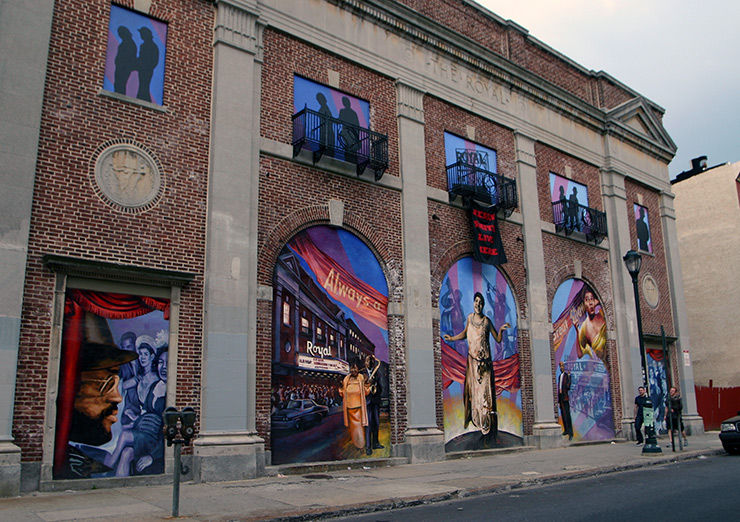 With a heritage as the first large American city to end slavery, Philadelphia Historic Sites are off the charts. With Paul Robeson, Marian Anderson, and Joe Frazier as Philadelphia natives this should come as no surprise.

Julian Abele Marker
DESCRIPTION: Julian F. Abele (1888-1950) became chief designer of Trumbauer architectural firm in 1906; responsible for designing the Philadelphia Museum of Art and the Free Library of Philadelphia. Julian was the 1st African-American to graduate from the U. of Pennsylvania School of Architecture and design large buildings in America. Very few clients of the architecture firm knew he was the chief designer.
ADDRESS: Marker at 26th Street and Benjamin Franklin Parkway, Philadelphia, PA MAP

Cyrus Bustill Marker
DESCRIPTION: Born into slavery, Cyrus Bustill (1732-1806) risked his life to deliver bread to George Washington’s troops at Valley Forge. Although a Quaker, ironically, he donated funds to build St. Thomas African Episcopal Church. He opened a school for black children at 3rd and Green Streets. Cyrus was the great-great-great grandfather of Paul Robeson. Recently, someone opened a bakery at the address below.
ADDRESS: 210 Arch Street, Philadelphia, PA MAP

James Forten Residence
DESCRIPTION: James Forten, Sr. (1776-1842) established a sail-making business at 95 Wharf Street with blacks and whites in his employ. He was estimated to have amassed more than $100,000, which was equivalent to tens of millions today. An abolitionist active in politics, he was a co-founder of the Free African Society in 1787. When British troops threatened Philadelphia in the War of 1812, James Forten, Richard Allen, and Rev Absalom Jones organized 2,000 black men to erect barrier fences at Gray’s Ferry along the Schuykill River.
ADDRESS: 336 Lombard Street, Philadelphia, PA MAP

Marian Anderson Residence
DESCRIPTION: Classical singer Marian Anderson (1897-1993) achieved legendary status for her 1939 concert at the Lincoln Memorial in DC. The concert was held at the memorial because racism prevented her from singing at Constitution Hall. Purchased in 1924, this home is filled with memorabilia and rare photos of her concerts. Anderson was proud to call Philadelphia home; tours of the residence by appt only. The admission fee is small and small children enter for free.
ADDRESS: 725 South Marian Anderson Way (South Martin Street), Philadelphia, PA MAP
PHONE: 215-732-6723

Christian Street YMCA
DESCRIPTION: 1st YMCA for African Americans is contained in its own building, the original structure was dedicated in 1914. This rebuilt modern facility remains a recreational and educational beacon for the community, as well as a meeting place for many African American organizations.
ADDRESS: 1724 Christian Street, Philadelphia, PA MAP
PHONE: 215-735-5800

Pearl Bailey Residence
DESCRIPTION: Pearl Bailey (1918-1990) began her stage career while living in this home. She won Amateur Night the Pearl Theater at 15. Pearl was a chorus girl and vocalist for several bands before moving on to Broadway and Hollywood. Her filmography includes Carmen Jones, Porgy and Bess, and That Certain Feeling. Pearl stayed active later in life by earning a Bachelor’s degree in Theology at Georgetown University in 1978.
ADDRESS: 1946 North 23rd Street, Philadelphia, PA MAP

Joe Frazier’s Gym
DESCRIPTION: Smoking Joe Frazier was the toast of the town for sports fans in the 1970s when he owned this historic gym. This site is listed on the National Register of Historic Places. Plans are underway to put in a Joe Frazier statue at Xfinity Live near the South Philadelphia Sports Complex.
ADDRESS: Broad and Glenwood Streets, Philadelphia, PA MAP

First Protest Against Slavery Site
DESCRIPTION: Though the first Africans arrived in Philadelphia in 1634 as free persons, slavery began in Philadelphia when the ship Isabella arrived in 1694; even William Penn was involved in the African slave trade; in 1688 a group of German Quakers wrote an elegant protest against “that peculiar American institution” at this site; their protest, fellow abolitionists and persistence led Pennsylvania to pass the first legislation of any state to abolish slavery in 1790.
ADDRESS: 5109 Germantown Avenue, Philadelphia, PA MAP

Johnson Residence
DESCRIPTION: In the 19th century this house served as a station on the Underground Railroad and a meeting place for abolitionists such as Harriet Tubman and William Still. It is the only Underground Railroad site in the region with an interpretive program open to the public.
ADMISSION: small fee
DAYS & HOURS: tours by appt
ADDRESS: 6306 Germantown Avenue, Philadelphia, PA MAP
PHONE: 215-843-0943

John Coltrane Residence
DESCRIPTION: John Coltrane (1926-1967) moved to Philadelphia in 1944 where he began his professional career; he cut his professional teeth with Miles, Dizzy, and Thelonius and became a jazz immortal in 1960 when he formed a pioneering group that fused African American, African, and Indian melodic elements; John W Coltrane Society preserves his musical legacy at his former address; efforts are underway to achieve listing on the National Register of Historic Places.
ADDRESS: $25
DAYS & HOURS: tours by appt
ADDRESS: 1511 North 33rd Street, Philadelphia, PA MAP
PHONE: 215-763-1118

Paul Robeson Residence
DESCRIPTION: Graduated from Rutgers and Columbia Law School, Paul L Robeson (1898-1976) was awarded eight honorary degrees from institutions at home and abroad; earned fame for his singing of Negro spirituals, stage acting, and his unflinching stand against America’s racism. Branded an undesirable during the 1950s for his views, Robeson expatriated to Europe; settled here, and lived to see the day when his staunchest critics were branded pariahs.
ADDRESS: 4951 Walnut Street, Philadelphia, PA MAP

Camp William Penn Headquarters Site
DESCRIPTION: Some of the earliest Black soldiers of the Civil War were trained here; artifacts and photographs from Camp William Penn and the abolitionist movement are displayed in a small museum in an old firehouse. The original schoolhouse is now the La Mott Community Center and Library located at Willow and Sycamore Avenue
ADMISSION: appt only
ADDRESS: 1618 Willow Avenue, La Mott, PA MAP